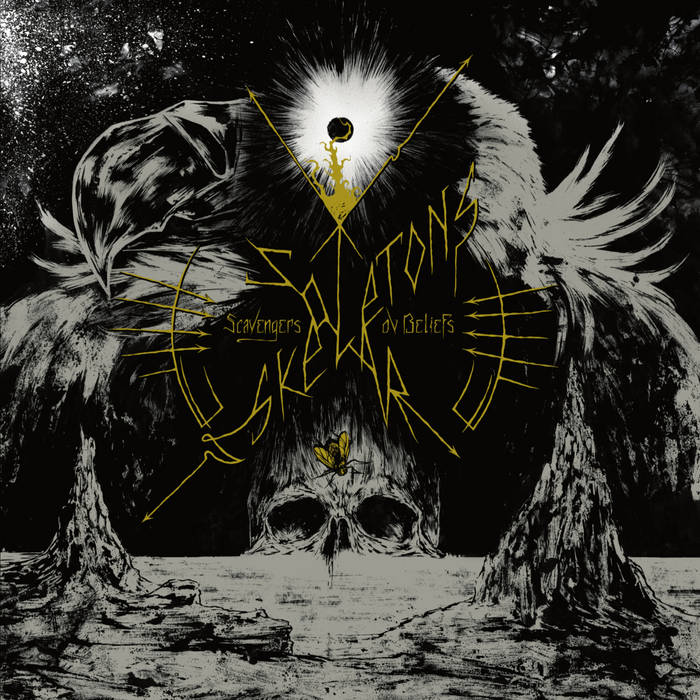 The dead sons of the Sun are back! Breaking one more time musical boundaries with their vision of modern music. While Necroethyl was focussing on a mixture of industrial lofiness applied to doom blues under a whisky shower, Scavengers Ov Beliefs, recorded right after, during the Necroethyl tour, is a collection of 4 tracks exploring 4 facets of musical heaviness: from fast stoner with martial crooning, to bluesy sludge, from gospel black metal power noise, to synthetic drone core. For this record, each songs can be taken as a musical concept, but also heavy technical experiments took place for each of them. It has been recorded at La Voix Sans Maitre studio in Britany by Cedrikum (Moho, Monarch, Mose…) on all analogue heavy gears. Cedrikum took a large part in the recording process, experimenting with Nicolas Esterle new ways of systematic overloading and non academic mic placement to create a unique blasting harshness combined with spicy deepness.

Solar Skeletons is a duet consisting of Eric Desjeux a.k.a. Tzii and Nicolas Esterle a.k.a Ripit, formed in February 2006 in Washington D.C., to achieve their longtime collaboration and establishing therefore a conceptual band with no limit of genre nor process. Since then, the duet has recorded several anthems ranging from psychedelic dub to heavy booty bass, from dark acid techno to distorted electro punk, from decadent blues to drilling black metal, from power electronic to sinking drone. They also recorded numerous collaboration works with diverse musicians from around the globe as Steve MacKay (The Stooges, Violent Femmes), Mike Watt (Minutemen, The Stooges), Marshall Allen (Sun-Ra Arkestra), Koonda Hoola, Stefania Pedretti (?Alos, Ovo), Mika Pusse (Chantal Morte), Andrea Ev (1997EV) and more ….