by Keiki, Bee and Flower 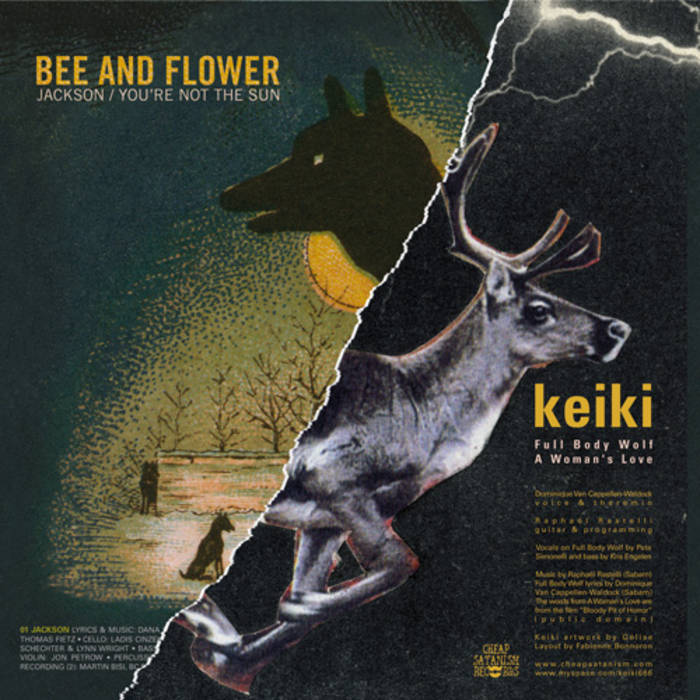 Cheap Satanism Records celebrates its second anniversary in style: the worthless Demon worshippers decided to play with the number "2" and release two split EPs including two of their seminal bands, Keiki and Joy As A Toy, who will present their second release on the label sometime in 2012.

Bee and Flower - a New York and Berlin-based band led by venomous Dana Schechter who, among others, has collaborated with Angels Of Light and American Music Club- will be on the ﬁrst split 10’’ vinyl with Keiki, who is currently ﬁnishing recording "Popcorn From The Grave", their third album (and second on Cheap Satanism Records).

On this record Keiki delivers two songs that could surprise bitter-sweet "satanic pop" regulars with its disquieting guitars and theremin that build up tension. The singing ﬂirts with spoken word and if the twisted lyrics were not here to remind us that we were on planet Keiki, their sound could be described as "Haunted rock". Recorded with Pete Simonelli, the soulful singer of Enablers from San Francisco, "Full Body Wolf" portrays the mysterious exchange between Dominique Van Cappellen-Waldock and Pete Simonelli who for the occasion plays at being a taxidermist whereas "A Woman’s Love" pays tribute to "Bloody Pit Of Horror", an old Italian gothic ﬁlm that has become cult ever since. Some will eventually remember that Keiki had produced a videoclip for the song "Ironing Man" (on their previous album) based on some extracts from ﬁlm.

"Haunted rock" has always ﬁtted Bee And Flower’s sound as their cinematic and tortured music could be the perfect sound decor of a ghostly scenery. With "Jackson" and "You’re not the Sun", Bee And Flower unveils two songs from the forthcoming album "Suspension" which will be without a doubt their most focused and direct album to date. Recorded by Martin Bisi in New York (The Dresden Dolls, Angels Of Light and Serena Maneesh among others) and Ingo Krauss in Berlin (Crime & the City Solution, Tindersticks), it redeﬁnes the band’s skillfulness at blending agonizing sweetness and delicate ferocity well-illustrated by the two tracks selected for the vinyl. The catchy yet darkly melancholic melody from the ﬁrst song contrasts with the bewitching and brilliant monotonous chant of the second.

Artwork by Bee and Flower.
Layout by Fabienne Bonnoron