by Joy As A Toy, Germanotta Youth 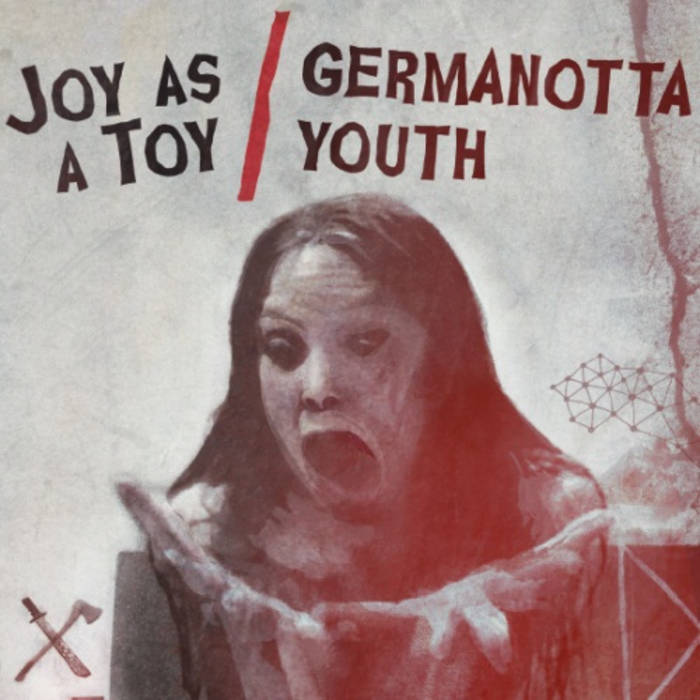 Cheap Satanism Records celebrates its second anniversary in style: the worthless Demon worshippers decided to play with the number "2" and release two split EPs including two of their seminal bands who will present their second release on the label sometime in 2012.

On one of these records Joy As A Toy cross swords with Germanotta Youth, an Italian band which counts Massimo Pupillo from Zu among its members.

Joy As A Toy is currently finishing recording their second album "Dead As A Dodo" which will be released in April on the label, and they immortalized this crazy project during the first edition of ZomBIFFF Night Cheap Satanism Records organized at the the Brussels International Fantastic Film Festival in April 2011. Bass player Pierre Verloesem (X-Legged Sally, Flat Earth Society...) had joined them on stage and the band used the occasion to play analog synthesizers and samplers to deliver songs inspired by the soundtracks of the master of Horror films, Dario Argento. On this split the band cuts the "freely inspired" to cover in the sauce they like "Profondo Rosso" theme composed by Goblin in 1975 and they conclude their vinyl face with a horrendously mad original track.

The description "Horrendously mad" would suit Germanotta Youth and one just has to read their statement of intent to be convinced: "Ciccone Youth was born in the 80s while Madonna (also known as Louise Veronica Ciccone) was ruling the world. We are in 2010, Lady Gaga’s era (Stefani Joanne Angelina Germanotta by her real name). So here comes the time of Germanotta Youth!!!". That says it all. Almost. With this split album Germonatta Youth who describe their music as "Cybergrind Techno Fast & Furious", play the same game as Joy As A Toy. The trio from Rome presents a cover of the famous ‘Halloween’ theme turning John Carpenter’s original song upside down before delivering a horribly sweltering crude-sounding track.

JOY AS A TOY